New Law of Ukraine On Concession

2. Concession Initiation and selection of the concessionaire

5. Transformation of state property lease agreement into a concession

9. Ownership of the concession object (facility)

10. Assignment of property rights under a concession agreement

13. Guarantees of the rights of the concession activity entities

15. State support for the concession

On 20 October 2019, the Law of Ukraine On Concession as of 3 October 2019 (hereinafter referred to as the Law) came into force. The adoption of the law allows to balance interests of all concession participants. On the one hand, the Law facilitates an increase in investment (including foreign investment) in order to upgrade and extend the infrastructure and provide high quality services of social significance. On the other hand, the Law creates conditions that will enable investors to profit from participating in a public-private partnership.

The Law has been developed in accordance with the EU laws, controlling the issue of a public-private partnership. When drafting the Law, the authors considered the international experience of concession projects implementation, which should considerably improve the Ukrainian investment climate in general, and eliminate some administrative barriers during concession projects implementation.

The Law introduces several positive novelties, aimed at simplifying the involvement of private capital of both domestic and foreign investors in public-private partnerships. The key novelties are as follows:

Concession can be used for the project implementation in all fields of economic activities, except for the objects, falling under the restrictions for concession according to the Ukrainian legislation.

Concession Initiation and selection of the concessionaire

The Law stipulates that proposals for fulfilling projects by way of concession can be initiated by the state, represented by the authorized bodies, local authorities, state enterprises with 100% share of state capital or the local community capital, as well as private legal entities (both local and non-resident, i.e. companies intending to lease the object at hand). 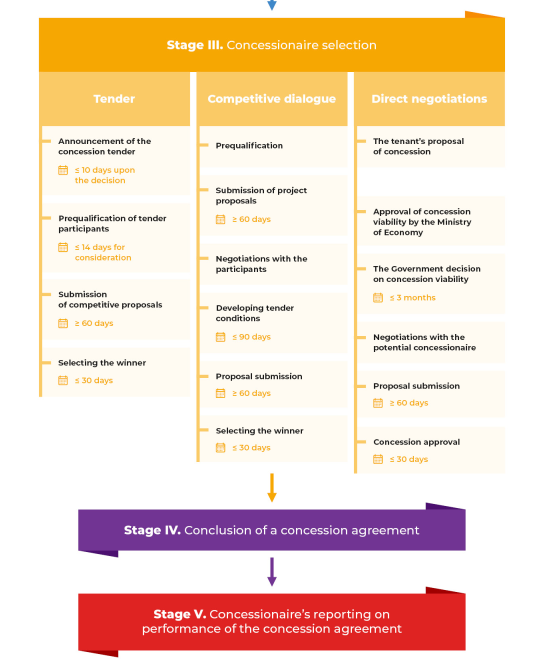 The decision as to the viability of state property concession is made by the Ukrainian Government within 3 months after the proposal submission date. In relation to the property of the Autonomous Republic of Crimea and municipal property, such a decision is taken by the Council of Ministers of Crimea and local authorities (corresponding local councils) respectively, at the next session of the relevant authority.

The concessor can select the concessionaire based on one of the following options:

1) by holding a concession tender;
2) as a result of a competitive dialogue;
3) by means of direct negotiations with the tenant of the state property being the object of concession.

The first two methods can be implemented via the electronic trading system, with the procedure to be defined by the Government of Ukraine.

The concessor can attract independent experts with advisory capacity to the structure of the trade commission on competitive condition. Such experts services are covered from the funds received as the registration fee of the tender participants.

The announcement of holding a tender is placed in public access in relevant media and in online resources. According to the decision of the concessor, the tender participants might be obligated to secure their competitive proposals by means of a guarantee or in another form, the amount of which cannot exceed 1% of the expected volume of capital investments of the project to be carried out under the concession terms. Such a guarantee payment is not returned to the tender participant in the cases provided by the law, e.g., if the participant, having become the concession tender winner, does not sign the concession agreement.

Another way of identifying the concessionaire is a competitive dialogue, partly regulated by the rules for holding a concession tender.

A competitive dialogue is applied if a concessionaire may not clearly identify technical, qualitative characteristics of the project, or if it is unknown what technical, financial and legal solutions may be offered by potential tenderers. In this case, the negotiations with the participants should be held to allow for an optimal solution (e.g., in case of implementing innovative projects, large complex infrastructure projects, etc.).

Transformation of state property lease agreement into a concession

The law provides the companies, leasing the state property at the time of adopting the Law, with an opportunity to transform lease relations into the concessionary ones. Undoubtedly, concession instruments give an investor a lot more opportunity than a relationship based on a lease. A concessionaire receives more legal opportunities to make capital investments in the property received by it, and therefore it enjoys more assurances as regards the return on the funds as it has earlier invested.

Meanwhile, the concession agreement validity period may not exceed the period remaining until the lease term expires, but obligatorily should be at least 5 and not more than 50 years.

A concession agreement may include other terms and conditions as agreed upon by the parties, in particular: conditions of the national materials use during the concession, those of employment and involvement of citizens of Ukraine, conditions of use of intellectual property rights, those of financing by a concessionaire the construction of related infrastructure facilities (railways, highways, engineering communications, etc.) and other terms as agreed upon by the parties. Prior to the concession agreement execution, the concessionaire has the right to involve third parties (contractors, suppliers and others), for which actions it will bear full liability.

An important provision of the Law, protecting the investor’s rights, is the provision that the concession agreement terms and conditions shall be valid for the entire duration thereof, including the cases when after entering thereinto the rules will be introduced by legislative acts, worsening the concessionaire‘s situation.

Ownership of the concession object (facility)

Assignment of property rights under a concession agreement

The subject of pledge (pledged property) may also be, in coordination with the concessionaire, the right of claim under the concession agreement.

In Ukraine, any immovable property shall be erected subject to and on the basis of urban planning documents, in particular it should comply during the construction with the requirements, as contained in detailed plans of territories (hereinafter – the “DPT”), where such immovable property is erected. At present, not all territories possess the developed DPT. Therefore in case of necessity to develop the DPT in order to implement the concession project, the concessor shall be obliged to ensure the development and approval of respective DPT.

Funding for DPT development may be raised at the expense of the state or local budget or from other sources not prohibited by the Ukrainian legislation. The financial costs related to developing a detailed plan of territory may be reimbursed by the concessionaire in accordance with the terms and conditions of the concession agreement.

Guarantees of the rights of the concession activity entities

The above guarantees shall not cover the amendments in the legislation as to defense, national security, public order and environmental protection, licensing, rules and conditions for providing socially important services in markets in the state of natural monopolies.

In accordance with the Law, the concession agreement parties may also freely choose the dispute resolution mechanism, including mediation, non-binding expert evaluation, national or international commercial or investment arbitration, including arbitration with location abroad (if a concessionaire is a foreign-owned enterprise/company within the meaning of the Law of Ukraine On Foreign Investment Regimes), and procedural rules for dispute resolution.

State support for the concession

The concessionaire may be supported by the state in the following forms:

The concessionaire’s control shall be exercised under the procedure to be agreed upon by the agreement parties and therefore, at the stage of concession agreement, attention should be paid to formulating the provisions on how and in what forms the concessor will exercise such a control, and clearly describing the parties’ rights and obligations pertaining to such a control.