How to control a Ukrainian debtor in times of crisis

The quarantine, as introduced on 12 March 2020, has forced many Ukrainian companies to reduce or suspend their operation. Service companies (hotel business, hospitality, entertainment facilities, etc.), and passenger carriers are unable to work at all.

The quarantine has already been classified as a force majeure event at the legislative level. Therefore, Ukrainian companies were given a legitimate basis to be released from the liability for an untimely fulfilment of their contractual obligations (provided they obtain the respective force majeure certificate).

In recent times, there has been a significant decline in economic activity in Ukraine. In addition, the Ukrainian national currency has considerably devaluated, which, taking into account the experience of 2009 and 2014, could result in a significant increase in the cases of Ukrainian counterparties’ failure to comply with their contractual obligations. Many Ukrainian companies will be forced to cease their activities, including through liquidation or bankruptcy, while others will face financial difficulties.

In such a situation, foreign counterparties and investors should not stand aside, watching the situation develop, but should actively monitor their Ukrainian partners’ suspicious actions to avoid possible problems.

Determining the degree of risk

Determining the degree of risk 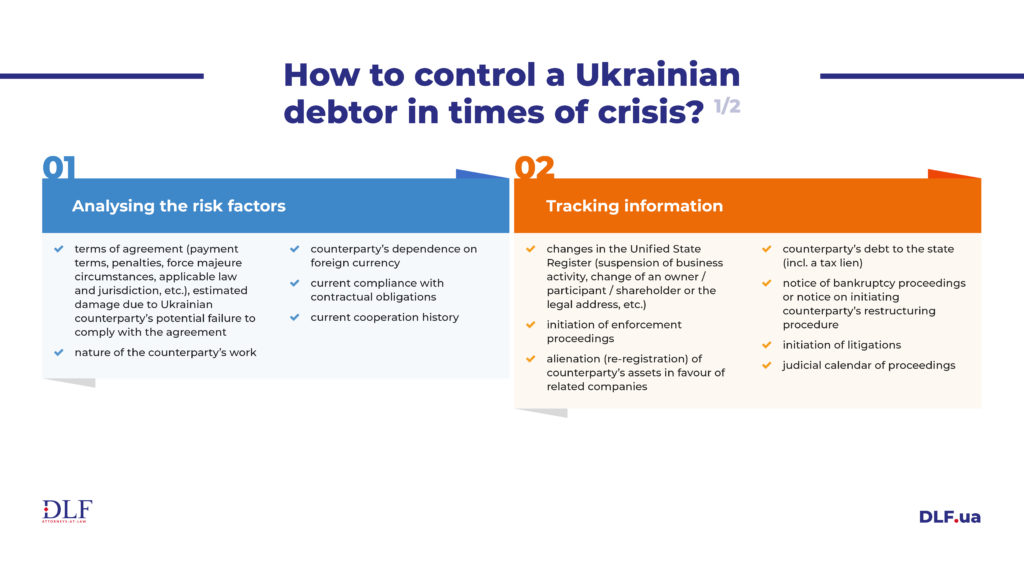 First of all, it is necessary to assess the likelihood of a Ukrainian counterparty violating its contractual obligations. To do this, we recommend you to analyse the following:

1. The terms of an agreement, as entered into with the Ukrainian partner: in particular, the provisions in respect of due dates (payment terms), penalties for disregarding the payment deadlines, and the circumstances under which payments may be delayed (in particular, force majeure circumstances). It is necessary to determine or at least estimate the amount of damage, which may be caused by a Ukrainian partner’s failure to comply with an agreement. It is also necessary to examine what law governs the agreement in order to understand, under what law and in which judicial authority the case will be settled, if any dispute arises.

2. The nature of the counterparty’s work and its dependence on the employees’ physical presence at the workplace: the manufacturing enterprises, being unable to switch to a remote mode and those, the work of which is connected with a direct contact with people, are now suffering the most.

5. The current compliance with the company’s contractual obligations: e.g., possible delays in complying with the obligations and commitments, unjustified interruptions in communication, additional commitments and arrangements neither documented nor supported by specific actions. The Ukrainian partner’s questionable behaviour may indicate its possible financial problems.

If there is an increased risk of non-compliance with the contractual obligations by a Ukrainian counterparty, and especially if there is a risk of its possible bankruptcy, we recommend you to regularly check the information about such a counterparty, paying particular attention to:

1. Changes in the Unified State Register of Legal Entities. This includes not only information as to the counterparty’s bankruptcy or winding-up, but also sudden substitution of its owner (participant, shareholder) or legal address change. These may indicate preparation for further actions by the Ukrainian partner.

4. The counterparty’s debt to the state, including a tax lien.

6. Initiation of litigations, where the counterparty is a litigant.

7. The judicial calendar of proceedings.

If the above-mentioned measures reveal some Ukrainian counterparty’s activity, the following scenarios might be at play:

1. Temporary financial or organizational difficulties are being faced by a Ukrainian counterparty. In this case, it is worth at least continuing to monitor the situation, paying more attention to such a counterparty. It is advisable to consider the possibility of debt restructuring, and, in particular, to register the right to pledge the relevant property or share (participatory interest) in the authorized capital of such a Ukrainian debtor, or transfer (convert) the debt into the Ukrainian debtor’s authorized capital.

2. If a Ukrainian counterparty is facing significant financial difficulties, this may be evidenced by the court cases or enforcement proceedings for the amounts significantly exceeding such a counterparty’s assets. In this case, you should:

a) Prepare for a Ukrainian counterparty’s failure to comply with its contractual obligations.

b) Draft the documents necessary for filing a statement of claim with a court (if the Ukrainian counterparty fails to comply with its contractual obligations). Bear in mind the obligatory apostillation/legalisation of powers of attorney, extracts from the trade registers and other documents (depending on a foreign counterparty’s country and its operational efficiency the documents certification may take a few of weeks).

c) Note that the litigations are possible on several grounds, in particular, those resulting from non-fulfilment of contractual obligations or bankruptcy proceedings. In the latter case, the Ukrainian law provides for a period within which Ukrainian counterparty’s creditors may file their claims against such a bankrupt company.

3. A Ukrainian counterparty has started the procedure for winding-up. The company’s winding-up is possible through its reorganization (company rights and duties are transferred to its successors) or liquidation. In any case, a foreign counterparty should be actively involved in the process in order to protect its interests (incl., to timely make its claims).

A notice on a Ukrainian legal entity’s termination shall be obligatorily published. Such a notice shall indicate a period for creditors to file their claims (between 2 and 6 months). It is worthwhile for foreign creditors to make their claims in a timely fashion, and to actively exercise their creditor rights, when reorganizing or liquidating the Ukrainian counterparty-debtor.

A creditor, may request from the terminated legal entity, obligations fulfilment of which is not secured by a pledge, to terminate or accelerate its obligation, or secure its fulfilment.

That is, having received the information about the notice on the Ukrainian counterparty-debtor termination, it is advisable to do as follows:

Please keep in mind that only the claims, as described below, should be considered as settled:

Foreign counterparties should be aware of some bankruptcy procedure peculiarities in Ukraine, as listed below:

1. Competitive creditors are obliged to file claims in writing against a Ukrainian debtor within 30 days from the date a notice on opening the bankruptcy proceedings has been officially published with the Commercial Court.

2. The creditors, having failed to file their claims to court on time, should be categorized in respect of a redemption priority as the other creditors (however, they are not entitled to a casting vote at the meeting and in the creditors’ committee).

3. The pledge creditors’ interests are protected, the conditions for exercising their rights to the pledged property are determined.

4. A creditor with at least 25% of votes shall be automatically included in the creditors’ committee.

5. In some cases, the head of the Ukrainian counterparty-debtor shall be jointly and severally liable for a failure to comply with the creditors’ claims. It is worth examining potential law violations by such a head and the possibility for the creditor to make claims against him / her.

6. If the Ukrainian debtor becomes a bankrupt due to the fault of its participants / shareholders or other persons, being entitled to give binding instructions to the debtor or being able to otherwise determine its actions, such participants / shareholders (or other persons) may be held jointly and severally liable if the debtor property is insufficient.

7. Certain transactions, as entered into within a three-year period preceding to the bankruptcy procedure commencement, may be invalidated.